1/n Hey @BDUTT ,after reading the whole article, I could see a sculpture crafted out of misunderstandings! Here in this thread below I give u a comprehensive rebuttal. Care to respond. Cc @UnSubtleDesi @RatanSharda55 @vivekagnihotri  https://www.hindustantimes.com/columns/shame-at-sabarimala-why-india-s-women-need-a-uniform-civil-code/story-U7FLp10SzZzfTvWnXov5aJ.html …

2/n Barkha u start off saying that being a proud feminist u can’t see traditions & customs frozen in time.R u aware of what u say? Plainly speaking tradition is transmission of customs or beliefs frm generation to generation, or the fact of being passed on in this way.

3/n Barkha, hence tradition is ought to be frozen in time or else it’s not tradition. Rather few traditions that orchestrates the threat to humanity must be shunned. & It’s not a feminist cause nor it can any be masculine as Societal progress sees no bar.

4/n @BDUTT 2/n &3/n clarify that the very highlighter if article itself is a misplaced argument. Now let’s move to the body of article. 🙂

5/n In the very 1st paragraph u speak of Women being assaulted. Can u pl give me at least 10 names who have been assaulted? Well let me tell u, here I’m making a clear distinction amid reporting journos & so called devotees or activists. Kindly don’t blow things out of proportion 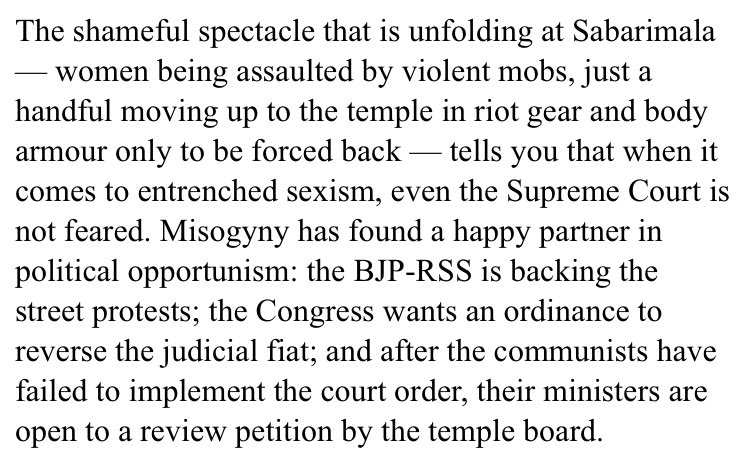 6/n @BDUTT weren’t the women u talk abt, actually trying to embark to deity not for devotion bt to subjugate an activism against the very rational practice although traditional. Pl tell me what’s the essence of visiting a place if u want to do everything against functionality?

7/n Do u advise kids to go to school & play 🏈 inside a literature lecture hall? Will u keep dancing on a flight just in case u see activism in it? Similar is this case of Sabarimala, people who don’t feel like worshiping r shouting frm rooftop to reach deity. Are u one of those?

8/n @BDUTT how do u defend the case of #RehanaFatima for the derogatory impressions her Facebook page gives to every one who believes in Sabarimala? Though I’m s teetotaller still I want to ask what of few drunkard Muslims start activism to enter Mosque with bottle of tharra? 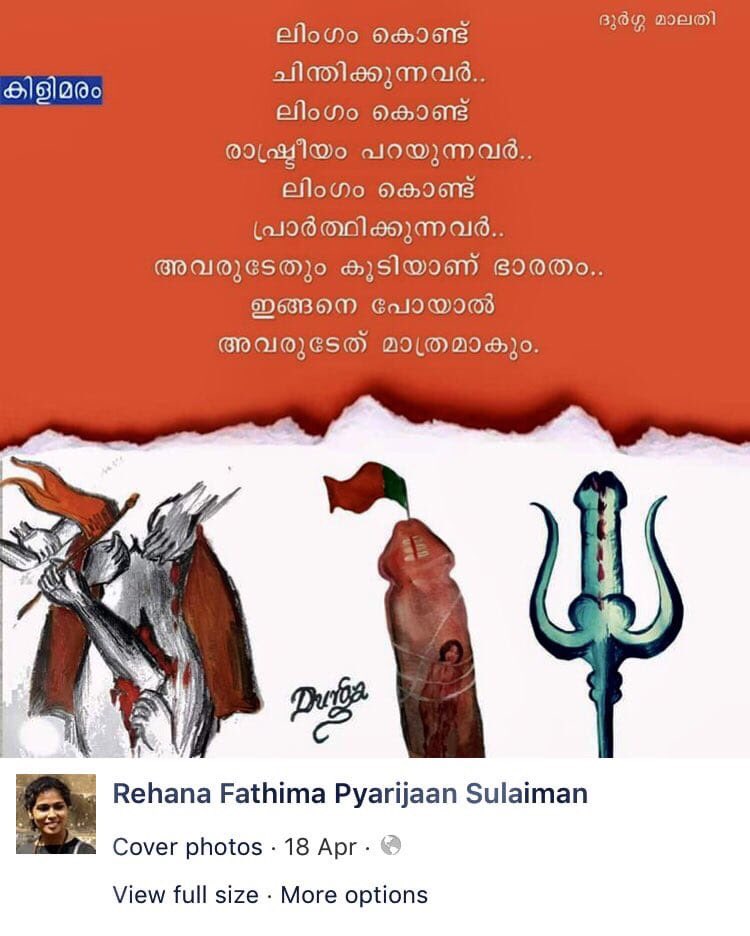 9/n @BDUTT let’s look at other side of coin. The bad Majority( #BadHindus ). Can u name 1 who knows inside-out of Sabarimala has passed hand to join activism? Now don’t say me that how does it matter? Had it not mattered Chandigarh wud hv been designed by Nehru & LeCorb the PM

10/n @BDUTT hope u remember ur conversation with @SadhguruJV . Didn’t he gave u corollary of His & Her toilet? Isn’t it very well understood that yes there are few things which come with common sense & it has nothing to do with sexism. Isn’t it so?

11/n @BDUTT pl refer this thread ny rebuttal to a good friend in regards to Sabarimala. This may at least make u clear abt wt exactly the deity & Shrine stand for.

12/n Let’s move on ahead in ur article. You make a remark of SC not being feared. Do we really fear Institutions or respect it in Democracy? 🤔 Then can u xpln why did Hindu accept Allahabad Court judgement on Rama JanmaBhoomi evn though 1/3 land was gvn to Sunni w board. 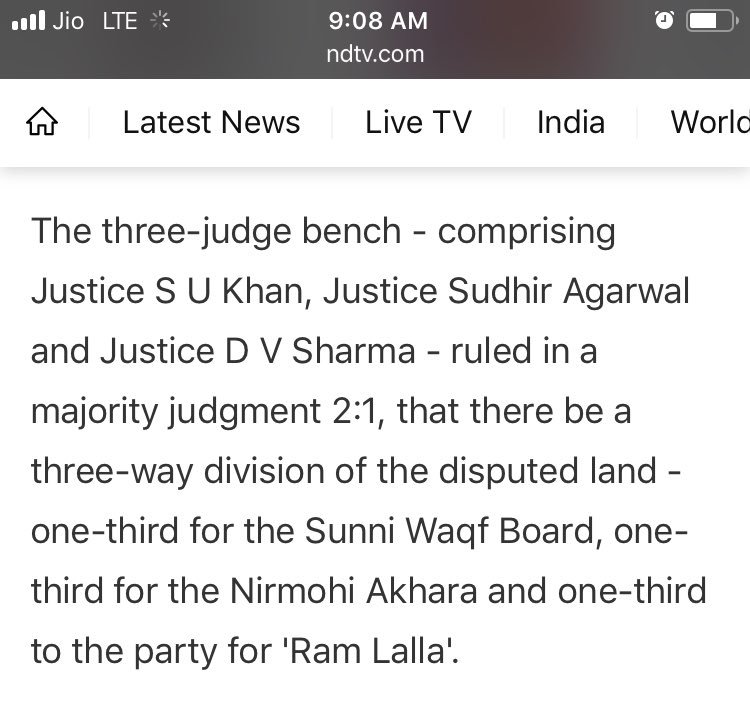 14/n Wasn’t protest & Satyagrah ought to occur? How do u call it disrespect of SC when gov(Kerala) even denied to give Constitutional Right?Isnt even SC mere a pyada of the great Smriti ‘The Constitution’? U say @BJP4India & @RSSorg are supporting street protest.

15/n @BDUTT not everything backed by whom u hate is a crime & after reading above 13 (2-14) how can u say that BJP & RSS are supporting the wrong? Isn’t it actually the time for u even to walk hand in hand with them?Let’s move on. u further talk of women empowerment sarcastically 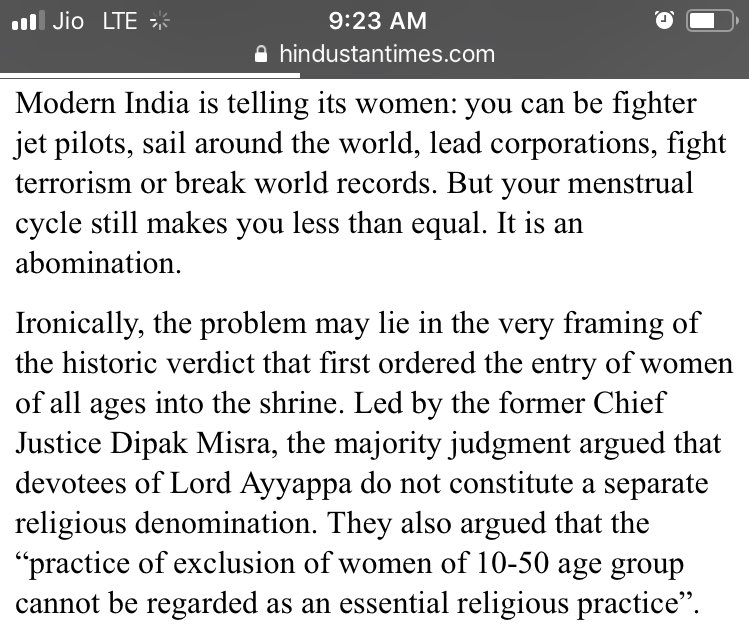 16/n You make bogus claim that the female r being discriminated for their menstrual cycle. Is it really so? Let me xpln. It is not related to menstruation & I m sure u must be aware the cycle often starts b4 10 & also continues beyond 50 at times. Medical SC acknowledges it.

17/n Every devotee visiting Ayyappa shrine are called as Ayyappa and they all have to wear the same kind of clothing. This uniformity in devotees is a specialty of Sabarimala.B4 entering Sabarimala Ayyappa temple, there is another temple where the devotees go.

18/n Its the temple for a goddess Malikappurathamma. She loved Ayyappan & wanted to marry him. But, Ayyappan said,”I hv already decided to be a Naishtika brahmachaari. So I’ll not be able to marry u. But wn KanniAyyappans stop coming to visit me, then at that time, I’ll marry u”

19/n Till then Ayyappan didn’t want young women 2come &see him. Bcoz of the love &care he had for her, this decision is taken.& the tradition is carried out for 1000s of years. @BDUTT we shud celebrate the love&romance of Malikappurathamma &Ayyappan than condemning the traditions

20/n @BDUTT I wonder y u see a problem if country celebrates female pilots, corporates, designers Ministers but wants to celebrate even a tradition of caring for adore amid two Devines? Is breaking his tradition helping female empowerment or Phogat Sisters bagging medals? Clarify

21/n @BDUTT u mentioned it to b a religious practice but my dear friend India is a very curious case which u can’t ever understand if u see things only from prism of Abrahmic religions. These r cultural practice like how Muslim sculpturs make Ganpati & worship it first.

22/n @BDUTT again u seem like a confused soul when u compare #InstantTripleTalaq with this case. Ma’am any sane person will tell u it’s a civil ground compared to which Hindu adopted Hindu Code in 1951. It took only 4 years ma’am for #intollerantHindus 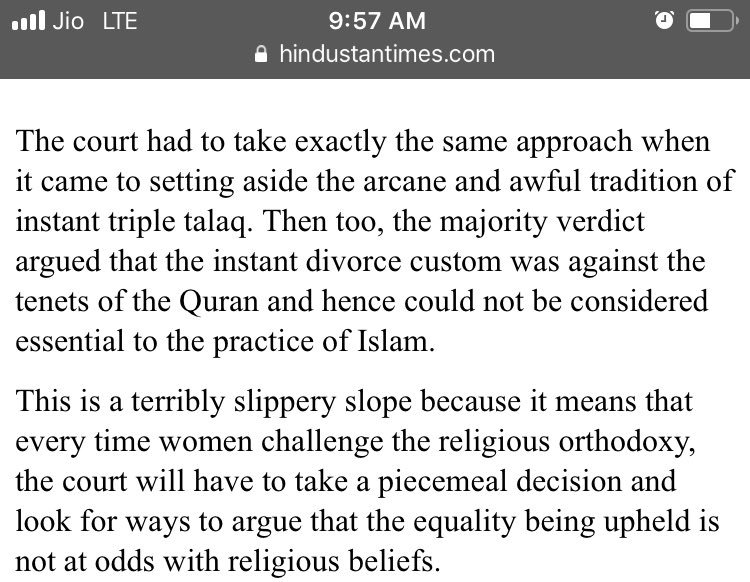 23/n @BDUTT the case which may b able to compare is Haji Ali.But again when we have a lovely story of adore the case of Haji Ali ws only based on misogyny.Trustees of Mumbai’s Haji Ali Dargah said it would be “a grievous sin” 2 allow women come close to the tomb of the male saint

24/n This point was raised in Bombay High Court while defending the ban on women from entering the inner sanctum. @BDUTT u urself can compare the two instances & tell us what is correct. Will u? This is ur buddy @IndiaToday ‘s report  https://www.indiatoday.in/fyi/story/haji-ali-dargah-why-women-were-banned-from-entering-inner-sanctum-337379-2016-08-26 …

____
Tip: mention @threader_app on a Twitter thread with the keyword “compile” to get a link to it.

… we’re asking visitors like you to make a contribution to support this independent project. In these uncertain times, access to information is vital. Threader gets 1,000,000+ visits a month and our iOS Twitter client was featured as an App of the Day by Apple. Your financial support will help two developers to keep working on this app. Everyone’s contribution, big or small, is so valuable. Support Threader by becoming premium or by donating on PayPal. Thank you.