n #SadarPranam to Ishvara within u @ImranKhanPTI .Perhaps no one taught u the history of ideology that you follow.

Nazis had 0influence on RSS bt MuslimBrotherhood not only drew inspiration but also help from Nazis.

Read this thread 👇🏼where I provide records from this book.Imran Khan✔@ImranKhanPTI

This is the RSS ideology that threatens not just Kashmiris or Pakistan or even just Indian Muslims, Christians & Dalits but India itself as envisaged by its Founding Fathers. https://www.haaretz.com/amp/opinion/hitlers-hindus-indias-nazi-loving-nationalists-on-the-rise-1.5628532?__twitter_impression=true …Hitler’s Hindus: The rise and rise of India’s Nazi-loving nationalistsThe ‘Hitler’s Den’ pool parlor that shocked me on a round-India trip 10 years ago was no outlier. Admiration for Nazism – often reframed with a genocidal hatred for Muslims – is rampant in the Hindu…haaretz.com48.3K5:50 PM – Aug 14, 2019Twitter Ads info and privacy29.2K people are talking about this

n With the rise of “Hitler” he was praised all across Arabia.

In 1938 various Arabian Magazines compared him with Prophet Muhammad.

n A printer in Tehran produced Hitlers’s picture with Imam Ali. It depicted that Ali was first Imam while Hitler last.

They compared Muhammad’s struggle against Jews with that of Hitler.
In demonstrations at Damascus (1940), Aleppo sung: In heaven Allah, on earth Hitler.

The king of Egypt Farouk sent Hitler a message of respect in spring of 1941.
Pg31

n The Pictures of Hitler were being displayed in shop windows of Baghdad.

A French Physician reported from Cairo: “In the Islamic world the Führer is credited with supernatural powers….he is Prophet who opposes Jews”

n Pg 32
Though “Mein Kampf” included passage against Muslims too, it was specifically translated in Arabic removing those passage after agreement with Hitler.

In Arab world, Hitler’s image as campaigned against Jews was publicised strongly.

How opportunist was M Brotherhood! 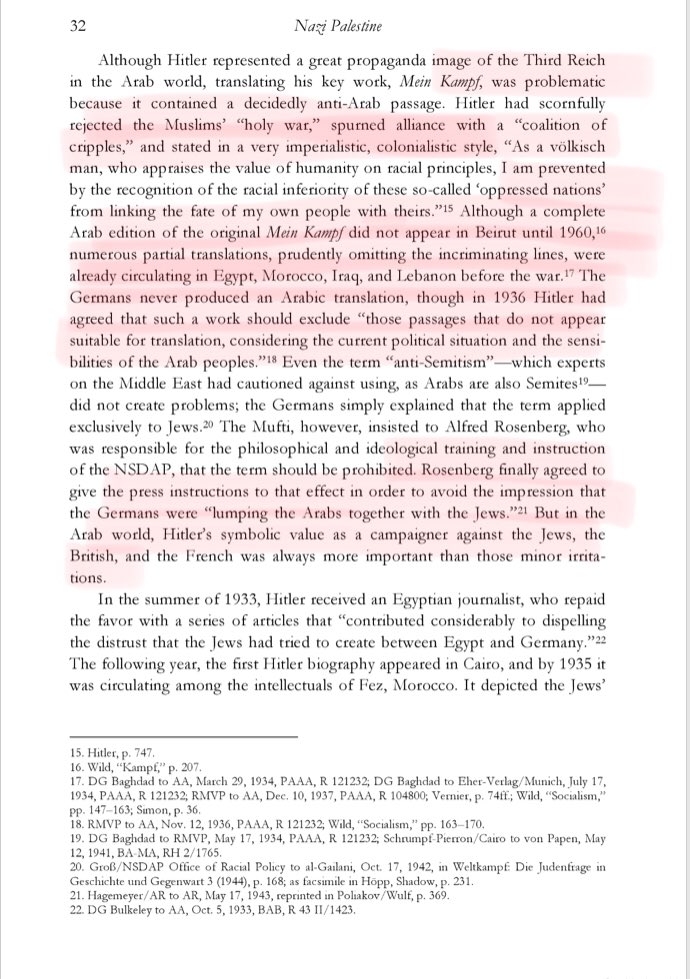 proposed to be transform police force into Nazi Model.

In October1938, Arabic versions of “Mein Kempf” were distributed in a Islamic Parliamentarian Conference at Cairo.

It speaks of dual character of M Brotherhood. 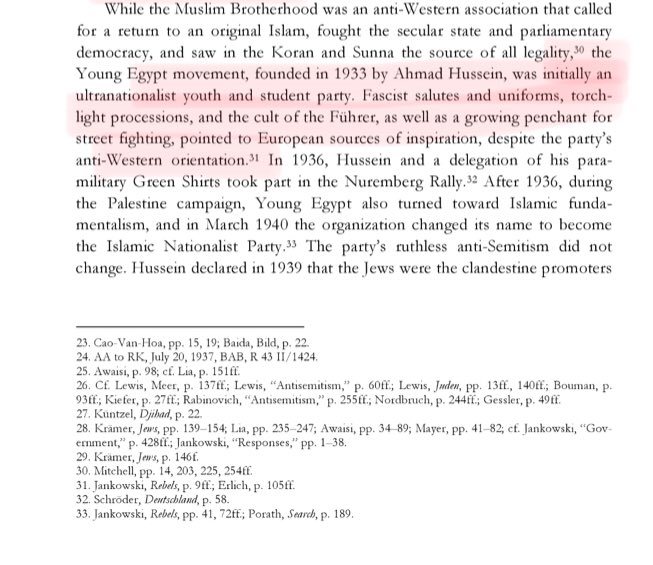 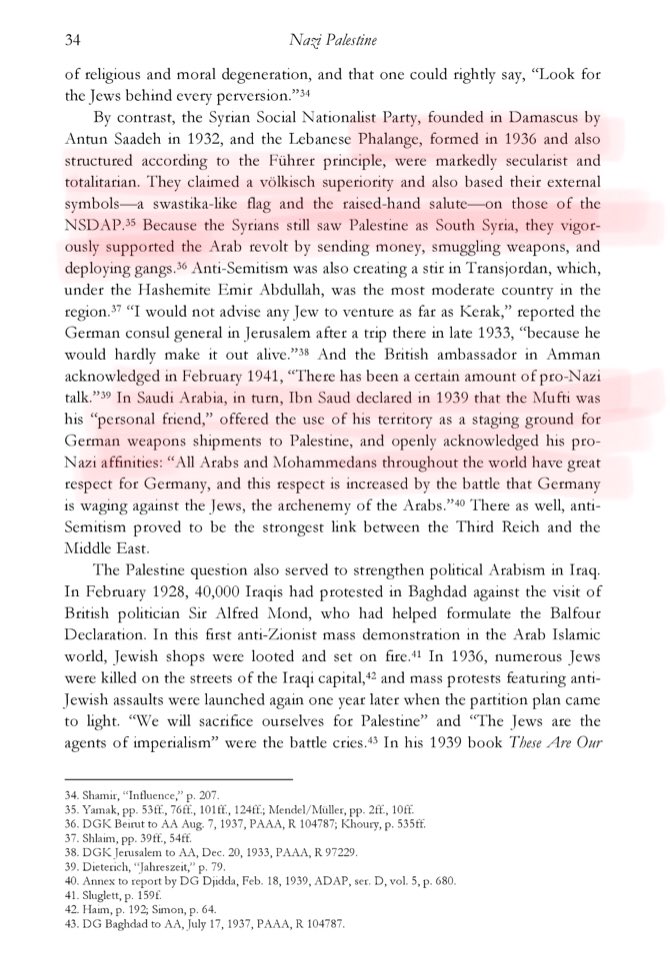 Ibn Saud declared open support to Nazis in 1939 for friendship with Mufti. He let his land be used for German weapons shipment to Palestine.

n Pg35,
1939, Al-Futuwa was created in model of Hitler Youth. Pan-Islamic +Pro-Nazi stand has become very prominent by then.

In 1935-36,a future German lieutenant saw large portraits of Hitler & reported following abt Kurds: they considered Führer as idol. 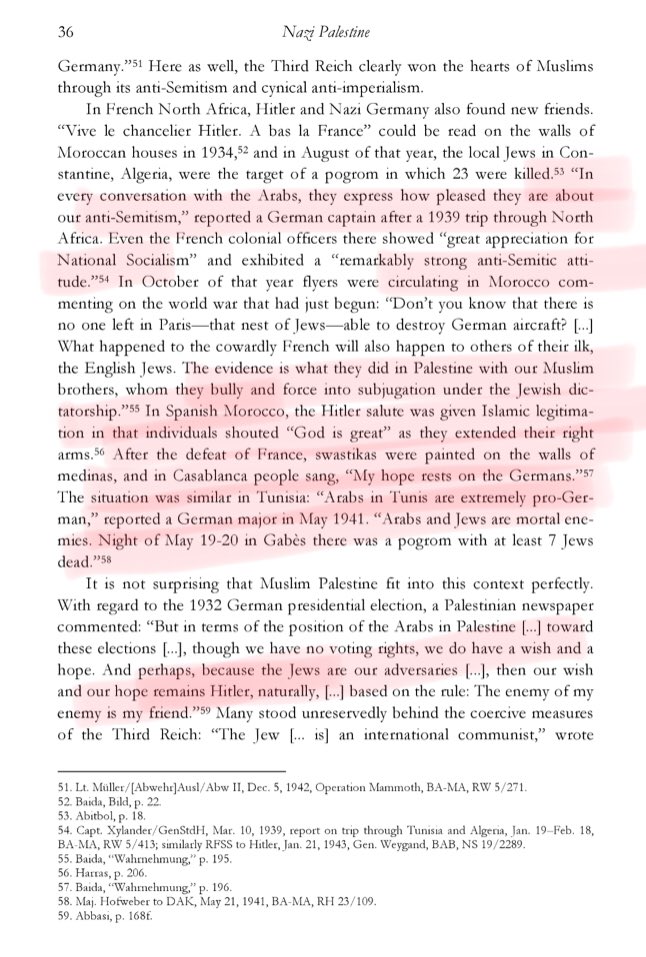 In Spanish Morocco, the Hitler salutation was given Islamic legitimation by shouting “Allah is great” & raised right hand. 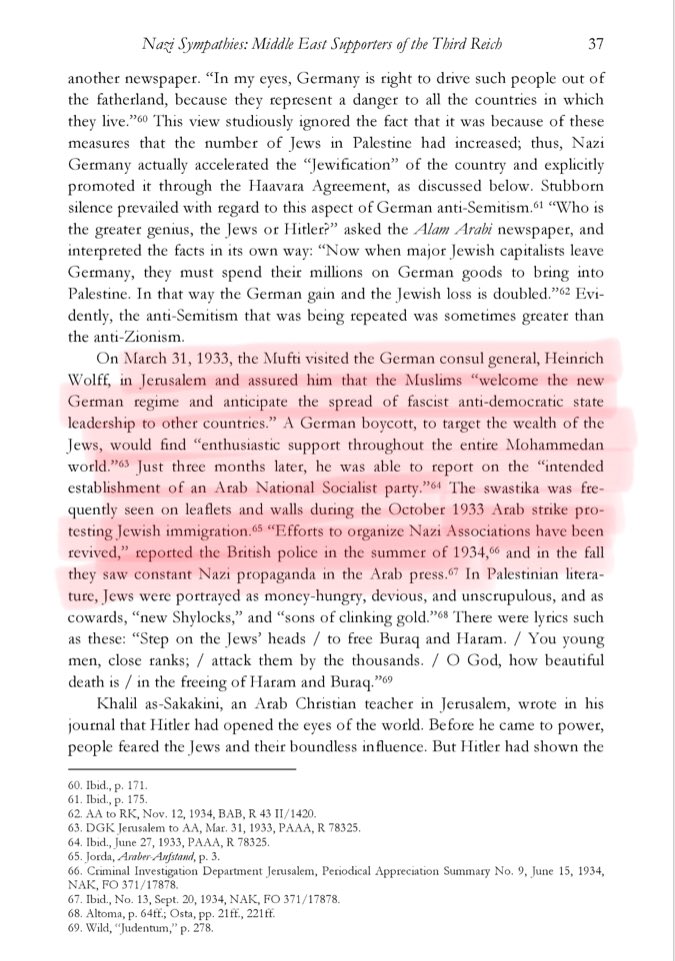 n Pg 37,
On March 31,1933 the Mufti of Jerusalem visited German Counsel & assured him that the Muslims “welcome the new German regime & anticipate spread of Fascism & anti democratic state leadership to other countries. 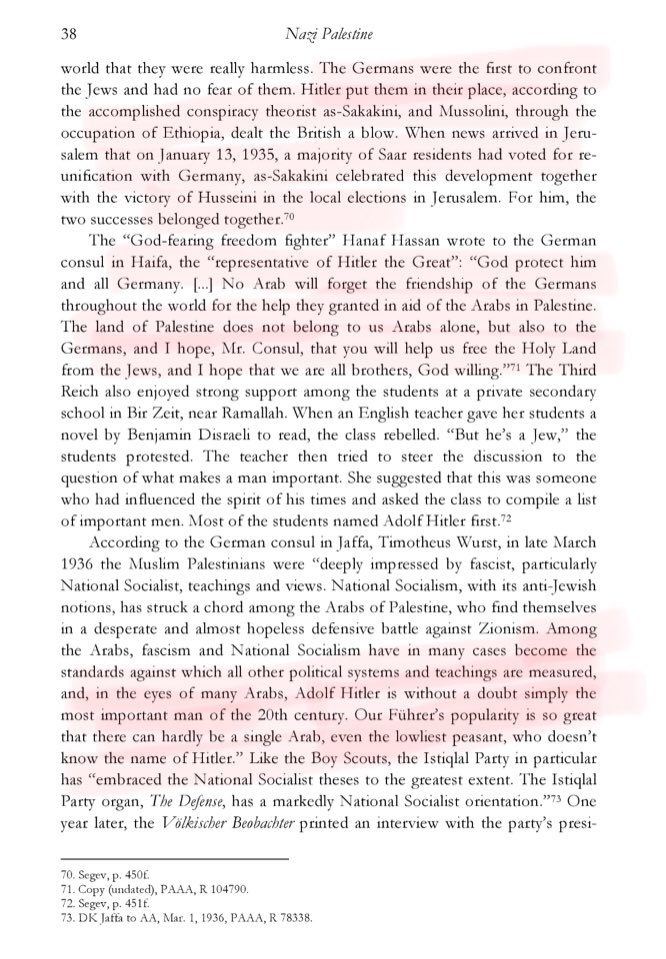 Among Arabs, Fascism & Hitler was considered the most important man of 20th century.

And idiots like @PJkanojia would say RSS was getting inspired by RSS in hat era. 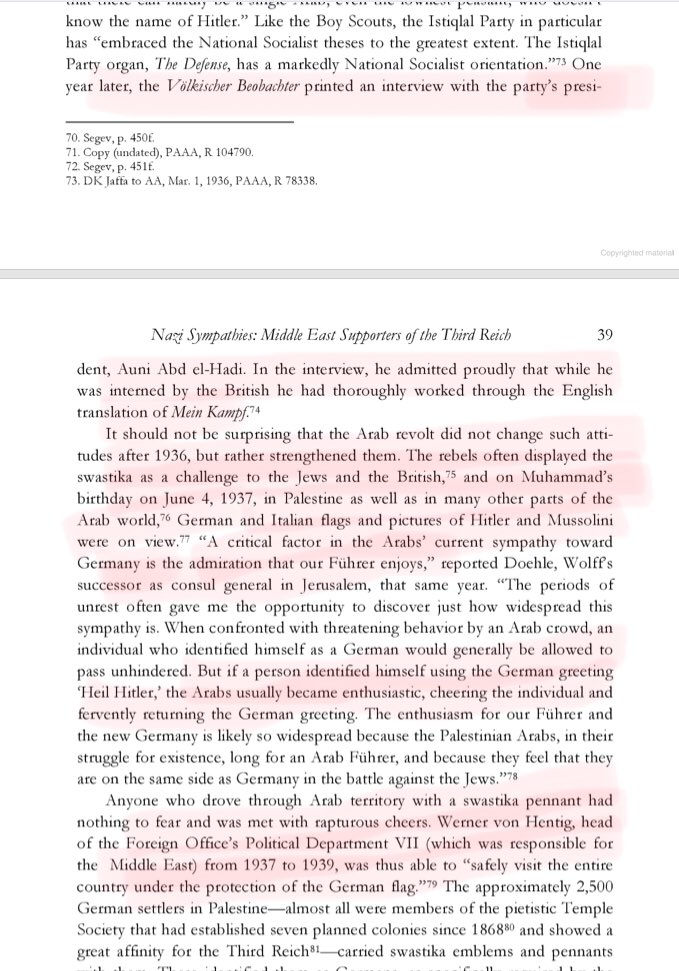 On Prophet’s birthday,1936 pictures of Hitler & Mussolini were on display in various parts of Arabia.

Arab always used to over enthusiast for “Heil Hitler”.

The Nazi symbol was best to secure oneself

n Pg39,
Arabs always longed for their own Führer

The Grand Mufti of Jerusalem was great friend of Hitler and it was because of Mufti that the whole Muslim world largely had the support of Nazis.

Hitler was called 12th Imam in the Arab World.

In this video see the Grand Mufti meeting Hitler.

The Grand Mufti of Jerusalem was great friend of Hitler and it was because of Mufti that the whole Muslim world largely had the support of Nazis.

Hitler was called 12th Imam in the Arab World.

In this video see the Grand Mufti meeting Hitler.