n #SadarPranam to Ishwara within you @waglenikhil ji. I’m sorry to say but you are spreading fake information about #Savarkar ‘s “Six Golden Pages” & also exposing ur flawed vocabulary skills. Read this string & respond(bt not b4 n/n)or else apologise for fakery. @Shubhrasthanikhil wagle✔@waglenikhil

The most poisonous book written by Savarkar is ‘Six Golden Pages’( Saha Soneri Pane in original Marathi). It is totally anti-Muslim and communal where he propagates his Hindutva theories. India supported Gandhi, rejected Savarkar and RSS.2,3272:31 PM – May 15, 2019Twitter Ads info and privacy1,506 people are talking about thisn Let’s begin checking ur “use of words” as starter. You say “…totally anti-Muslim & Communal..” Any idea what does”communal”mean?

Is being Communal~Anti-Muslim? NO It’s not.

Definition of “Communal” in image2. In short anything relating to “one community” is “Communal”.

n So @waglenikhil by internationally accepted definition of “Communal” anyone calling “anti religion~communal” is but a FOOL. Do you get it?

Further,bcoz you have spoken for Gandhi, while shunning Savarkar. Let me give you a comparative though I’m an admirer of Gandhi. Read👇🏼 n On October 7, 1905, Savarkar staged his first dissident act when he incited a group of students to burn a pile of foreign clothes. He was first Indian Political leader to call for Swadeshi. He was 22 then. Cc @Sanjay_Dixit

n The bonfire was criticised by Gokhale, the moderate leader who was the Guru of same Gandhi ji who did bonfire of foreign clothes 17 years afterwards.
( @waglenikhil can u clarify if Savarkar was wrong in 1905 or Gandhi in 1922,as Gokhale was against it,though Guru of Bapu)? n Now, what was Gandhi Ji doing when he was 22? Any idea?

Gandhi, at age 22, was called to the bar in June 1891 and then left London for India. His attempts at establishing a law practice in Bombay failed because he was psychologically unable to cross-examine witnesses.

n He returned to Rajkot to make a modest living drafting petitions for litigants, but he was forced to stop when he ran afoul of a British officer Sam Sunny. 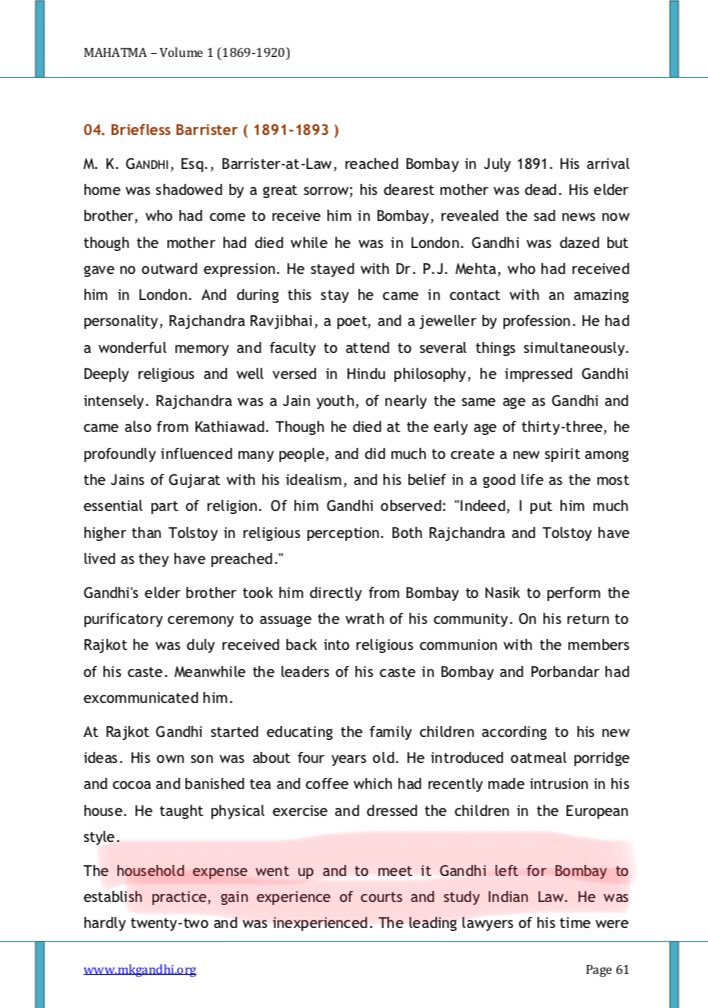 n Following the bonfire ,the Principal of Ferguson College expelled Savarkar & fined Rs10.He became not only the first Indian leader to make a bonfire of foreign cloth but also the first Indian student who was rusticated frm a Government-aided institution for political reasons.

Link (esamskriti.com/essays/docfile…) n Savarkar was the first Indian leader of India to daringly proclaim absolute political independence of India as her goal (EVEN BEFORE LOKMANYA TILAK called Swaraj a birth right).

n Savarkar spoke about complete independence in 1904, when he was 21 while at 21 Gandhi was struggling to establish his “Law Practice.”
That apart Gandhi had even proposed “Dominion Status” over “Complete Independence”.

n Savarkar was the first barrister who was refused the degree on account of his political line of thought by the British Government.

n On the other hand, as explained earlier, Gandhi was called to Bar but failed to practice.

Savarkar was the first graduate to lose the degree from an Indian University (Bombay University) for his love of independence.

@waglenikhil can you pl quote any such incidence related to Gandhi? n Savarkar was the first Indian leader to invest the problem of Indian independence with international importance.

n Wrote Sir Valentine C in the London Times “…The Chitpavan Brahmin whose bent of mind is far practical works in silence.Even as the Bengali did the shouting it was Pune that provided the brains that directed the Bengali extremists”.

n He also highlighted the cruelty of British during that period who slaughterd outright ordinary Indians on flimsiest pretexts.He was the 1st Indian leader to celebrate 50th anniversary of 1857.

n While Savarkar was having bold impact on Independence movement & making Britain chew hard nuts,Gandhi met him in 1909at India House.Gandhi couldn’t agree to any of Savarkar’s work & after returning to India condemned each Indian revolutionaries in London(especially Savarkar)

by Dhananjay Keer​, Ch 4, para 3 n Savarkar was the first Indian political leader to build a pan-Hindu temple where former ‘untouchable’ was a Pujari (1931) while Gandhi coined “Harijan” in 1932.

n Savarkar had written about a fight against “Untouchability” way back in 1920. Ref for snippet

@waglenikhil there are lot more issues to be discussed. Which I will continue to post in a while, where I will even explain abt Prison life, Hindutva etc. (savarkar.org/en/encyc/2017/…)